“They will rebuild the ancient ruins and restore the places long devastated.” (Isaiah 61:4)

After the amalgamation the joint congregation was faced with the question of securing a suitable place in which to worship and, being promised liberal support by the Central Fund Committee of the Church in Edinburgh, they looked for a site.

The Seaforth family, Brahan, offered a site on land on the Maryburgh side of the former road bridge* but the congregation accepted the offer of Sir Kenneth Mackenzie of Gairloch, the laird of Conon, to build church and manse on sites he owned in Conon Bridge.

*[The site offered in Maryburgh may have been that which contained a small wooden building in the garden area adjacent to Albert Place, described as “Maryburgh UF Church” in a photograph appearing in a local newspaper some years ago (possibly The North Star). The newspaper cutting has long since been lost but perhaps “somebody” out there has the original?] 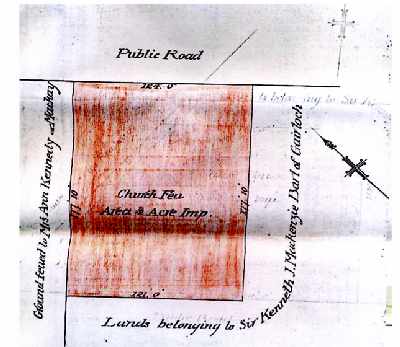 Again quoting the Ross-shire Journal, “the site is one upon which some old ruinous property was standing, and which was considered a great eyesore”. A study of the valuation rolls prior to 1909 reveal the church site in name of “Reps. of John M Ferguson, blacksmith” and, later, “house (ruinous) Sir K J Mackenzie of Gairloch”, while the site for the manse was adjacent to the smithy owned by John Robertson, blacksmith.

The feu charter which was granted by Sir Kenneth Mackenzie in 1910, dwells mainly on the type of buildings to be erected as church and manse and their subsequent maintenance but banned the Trustees from carrying on any trade or business within either building! Another unusual requirement was: ” … the said Trustees shall be bound not to place a bell in or in connection with the said Church” and ” … it shall be in the power of (Sir Kenneth) to prohibit the ringing of such bell if any feuar or leaseholder in the said village shall object to the noise which such bell ringing may occasion”. For how many years have we broken this stipulation?

In the months prior to the commencement of building, the congregation appears to have instituted a Building Fund, which benefited from the sum of £400 raised by special collection at a service in April 1908 during worship at their regular venue in Conon Public Hall. To this was added a grant of £1,800 from the Buildings Committee in Edinburgh, leaving the congregation to find £100 towards the cost of £2,300 for both church and manse.

By December 1908 the architect, William Mackenzie of Dingwall, had prepared plans for both properties and the successful contractors were announced:

Although it has not been possible to secure a photograph of the Church at the time of its formal opening on 21 October 1909, the description in the Ross-shire Journal is worth quoting:

“The church is built in the early Gothic, pointed style of architecture, all of Conon freestone, and has a handsome belfry on the front gable and an entrance porch. The building comprises a church proper and a side transit which forms a hall (in 2009 the annexe) which is so arranged by means of a folding screen (in 2009 remaining folded into the connecting wall) that it can be added to the church when it may be required. It also contains a vestry and a small end gallery. It is built to accommodate 325 people, and the hall 60 additional. There is a handsome platform pulpit at the opposite end from the gallery with ornamental pointed canopy behind. The church is heated with hot water and lit with handsome belge lamps.

“Internally the church is finished with principal couples forming a close roof. The walls are plastered and harmoniously tinted in warm pink, and are lined all round the lower portion with dado lining. The whole woodwork is stained and varnished walnut colour. Throughout the building the colours blend harmoniously together. The church is complete with inlet and extract ventilation, and the entrance is enclosed with a neat stone wall and iron railing. The glazing has been carried out in small squares of tinted cathedral glass and leaded frames.”

The manse is described as: “… situated at the top of the village facing south and commands a magnificent view of the whole surrounding country, which at that particular point is one of the best bits of landscape in the county. The building is well finished and has had the necessary accommodation suitable for its purpose.” 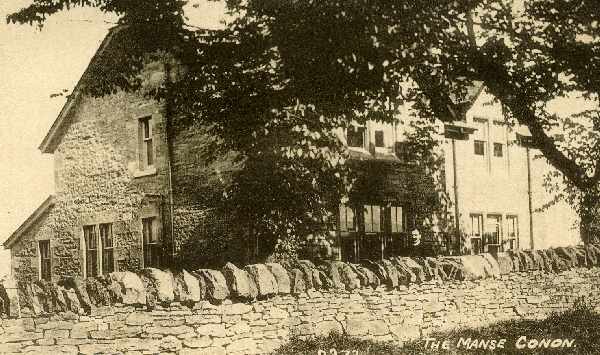 Photograph courtesy of Donald Macleod.
Estimated taken in the 1920s and the minister would therefore be Rev J Izzat Johnstone.

So Ferintosh and Maryburgh UF congregation now had buildings suitable for their needs, but in September 1910, barely six months after his induction, we find the Rev Alexander Macinnes submitting plans to the Dingwall UF Presbytery for an extension to the church and improvements to the manse! Once more it is easier to quote the Ross-shire Journal:

“For some time it had been felt there was not enough accommodation and so people were going to other congregations. The congregation desired Presbytery to give a letter of recommendation to the Building Fund Committee. The amount required, following plans drawn by William Mackenzie, architect, Dingwall, was probably about £558 which, with present debt of about £32, would require about £600. Maryburgh and Ferintosh proposed to hold a bazaar in 1911 and, with a grant from Building Fund Committee, hoped to clear the debt. Presbytery instructed the clerk to send a recommendation.”

Subsequent reports from the UF Presbytery make no mention of an extension to the Church and comparison of the description of the building in 1909 with that of 2009 would suggest that the proposal fell by the wayside.