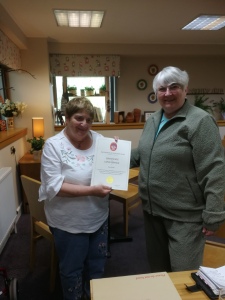 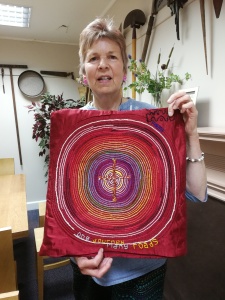 On Monday members of the Guild took ourselves off to Forres for lunch in the Potting Shed. This was to mark the end of the session and to look forward to next year.

Anne Smith had been absent during the Moderator’s visit . So Janet Winchester presented her with her long-service certificate for more than thirty years.

Irene had made a cushion cover which will go from Ross Presbytery to the National Meeting in September. This represents the theme for the next three years of “One Journey Many Roads”. Great design!

All in all a grand day out, as Grommit would have said.