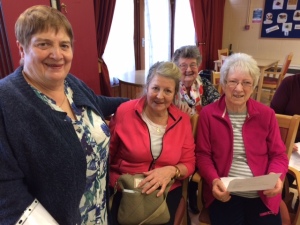 Eleven members of the Guild visited Cameron House on Friday 8th February. A programme around Robert Burns had been devised by Janet with songs, poems and music. We were all learning from each other when it came to Scottish words and this depended from which part of the country you came. I hope you like the puddock which is being held by Janet!

After the entertainment part of the afternoon, it was rounded off with a short act of worship.

The residents and staff really love to participate especially with the well-known songs and hymn.

As always, it is difficult to work out which group benefits most, the Cameron House residents and staff or Ferintosh Guild?